July 16, 2021 • Tim Forde • Dragon
Dragon Derby – How it all started
The Dragon Derby, 14 short races in two days, is the oldest series of GHYC. I came up with the idea in 1987. All races were in the inner Harbor started from the flagpole, so that it was also fun to watch. Everyone said I was nuts, that the boat that won the start would win the race, there would be many collisions and competitors would not be interested.
The Dragon Derby became an immediate success and has continued to be one of the most popular series in the GHYC racing calendar. For about 10 years I ran the Derby rather uniquely and informally and Mount Gay Eclipse rum always featured at the prizegiving.
The starting signals were red, white and blue cylinders almost a meter long, easily visible from a distance. A cylinder was dropped one minute before the next cylinder was raised. This was the standard American system which I felt was better than the Irish system (IYRU Racing Rules of Sailing). There were no penalty turns, rather you hoisted an I flag and accepted a points penalty, or withdrew. There were four discards. A withdrawal or a penalty accepted could be discarded DSQs could not be discarded. This was done to minimize or eliminate protests.
GHYC Race Committee took over and I started to take part in Gypsy. Racing was very close and intense, no serious collisions but many protests. The GHYC protest committee distinguished itself by continually calling witnesses and spending excessively long times before announcing the decision.
By the time the protest committee announced the decision, the parties involved usually had so much to drink they could not care about the result. Happily this era has passed. There have been very few protests in recent years.
Running the series from the flagpole with all races inside Sunk Rock buoy , made Dragon racing in Glandore a spectator sport.
Against my wishes the Derby series moved to the outer harbour, between Adam and Eve Islands, three years ago. GHYC did this because of the increasing conflicting activity in the inner harbour, Squib and Dinghy Racing as well as rowing championships. However it became possible to set much fairer start lines from a Committee boat and the Dragon fleet was growing.
Dragon Derby 10/11 July 2021
The Race Committee, RO David Forde with assistants Jess O’Leary, Zach Carr, Roger Nunn, did a superb job this year. He mixed windward leeward courses with triangular courses which kept everyone happy. On windward leeward courses there was a spreader mark, on the start line there was an inner distance Mark eliminating the danger of a jam up at the committee boat end of the line and a boat hitting the committee boat. He laid good lines and adjusted them as necessary so the fleet was spread out along the whole line, no jam ups or starting line protests. 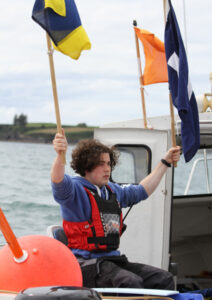 Weather conditions were perfect, wind roughly Southwest 10 to 15kts, occasionally a little more in gusts, but no really strong gusts.
Aphrodite, John Wyles, Axel Kinderman & Peter Hayes, gave everyone a sailing lesson as they had 11 bullets in the races that counted – three th
row outs in the series.
Second and third was a very close contest between Tarus, Mick McKenna, and Phyloong, Rui Ferreira. Tarus won the battle with 33.5pts to Phyloong 34.5pts. In the third race they finished a dead heat for third place.
The fourth and fifth places were again a hard-fought battle between Zu, Vince Tubbs, 48 pts and Leah, Mark Barrett, 49 pts.
Magic, Commodore Eamon Timony, War Baby, Warren Brown, Gypsy, Don Street, and Miss Fire, the Hayes sisters and Jess Tubb , the only all women team, followed in that order.
If Warren Brown of War Baby had he been racing the first day War Baby would most probably have joined in the battle for top places in the series. On the second day, seven races, War Baby put together five seconds, third and a fourth despite being short one crew.
The GHYC RIB Keiko, crewed by Lee, Carla & Eolann Miles, Ben Perez, provided safety standby throughout the event. Kathleen Hayes was on board Sunday taking the wonderful action shots.
Gypsy age 88 is the oldest Dragon in the world regularly racing. She is helmed by me, as I approach my 91st birthday, I am the second oldest Dragon helm in the world. Gypsy had flashes of brilliance. The first day, good starts, and went in the right direction. Gypsy was in the top of the fleet at the windward mark but was hampered with Spinnaker and spinnaker pole problems. Spinnaker pole carriage came off the track and spit balls all over the deck. The last race was sailed with no spinnaker twice around windward leeward. God gave Gypsy a gift. The leeward leg was absolutely dead downwind so sailing Gypsy by the lee I kept the jib full and she managed to hang on to fourth place.
The second day Gypsy did not do well. I changed our starting tactics which did not work out and obviously sailed the wrong direction on windward legs. Despite a jury rigged spinnaker pole attachment the crew did good spinnaker work but not enough to compensate for the skippers errors.
I believe Gypsy had more fun than any other crew as is illustrated by the fact that immediately on crossing the finish line one of the crew handed me a bilge cooled Heineken. 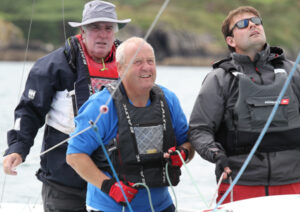 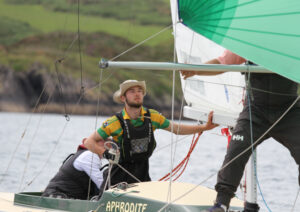 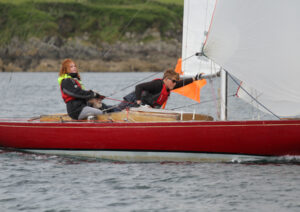 I opened the beer and turned the helm over to Aisling  Forde age 16  . She is sailing her fourth season as regular crew on Gypsy.
Our spinnaker problems were caused by the season starting late, blowing so hard that Gypsy was not racing, so I did not have time to properly train the two new young crew.

If the crew fouls up it is the skipper’s fault because the skipper had not properly trained the crew. Unlike most years when the prize giving has been two or more hours after the finish of the last race, the prize giving was 1700, soon after the races had ended. This was possible as David had been sending the results of each race ashore. Hal Andrews, working remotely with Sailwave, posted the final results on GHYC website before the teams came ashore.
Eamon Timoney and John Wyles filled the decanter with Mount Gay Eclipse rum provided by me. In years gone by everyone drank from the decanter and two full bottles of Mount Gay were consumed. But because of the pandemic Mount Gay was poured from the decanter into plastic cups and the competitors did not quite drain the two full bottles of Mount Gay rum.
Hopefully next year all competitors will be able to drink directly from the decanter again.
Cheers
Don Street, Gypsy