As the first big event of the season, the annual At Home Regatta kicked off during the June Bank Holiday Weekend . Cruising boats from KYC, RCYC, and SHSC, some 22 in all, raced or cruised into the beautiful Glandore Harbour on the Saturday afternoon. There was even a boat from La Rochelle, France, adding an international flavour!

Meanwhile the GHYC Squib and Dragon fleets were racing in Glandore Bay and Harbour. All the visitors and club members, some 120 or more, were fed at a sumptuous BBQ with refreshments provided by a pop-up bar, all run by GHYC volunteers.

Other helpers provided, erected and dismantled the temporary marquee and gazebos and also ran the ferry service for the visiting yacht crews well into the late hours as Casey’s Bar in Glandore village gradually emptied.
During the BBQ trophies were awarded for the race from Kinsale to Glandore by GHYC and KYC. 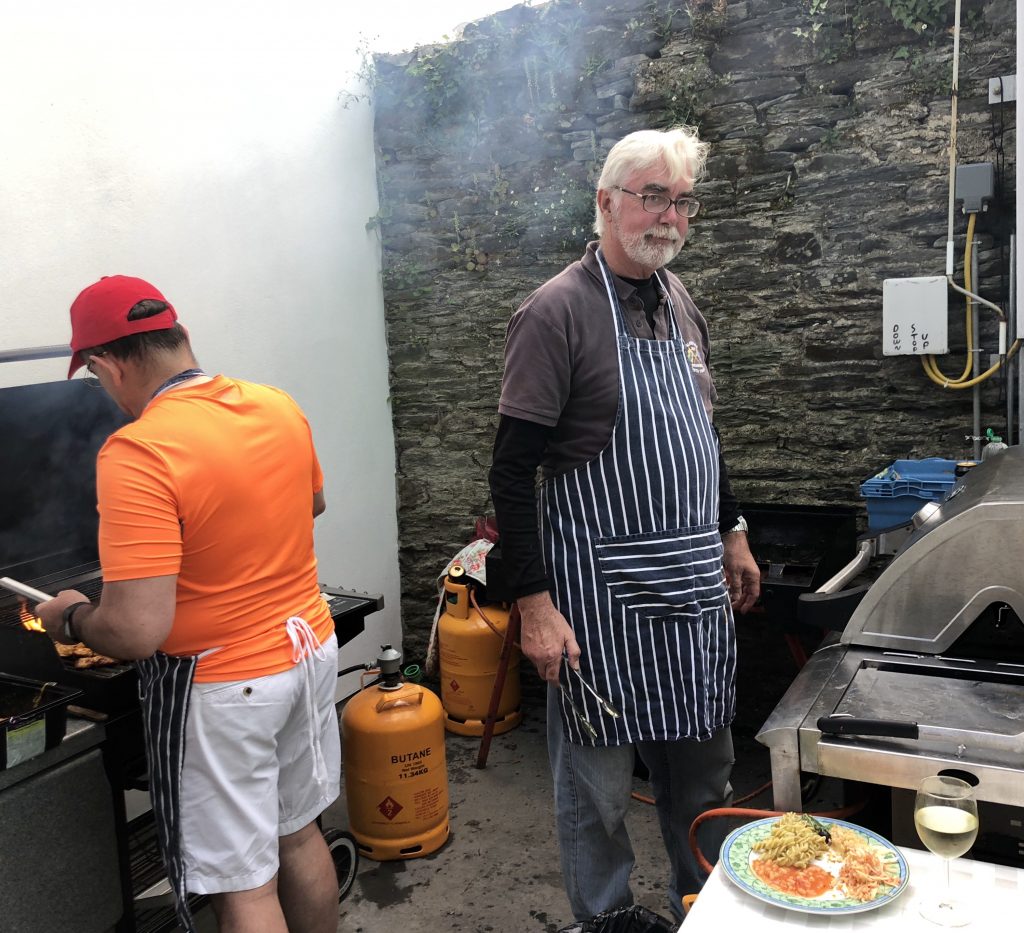 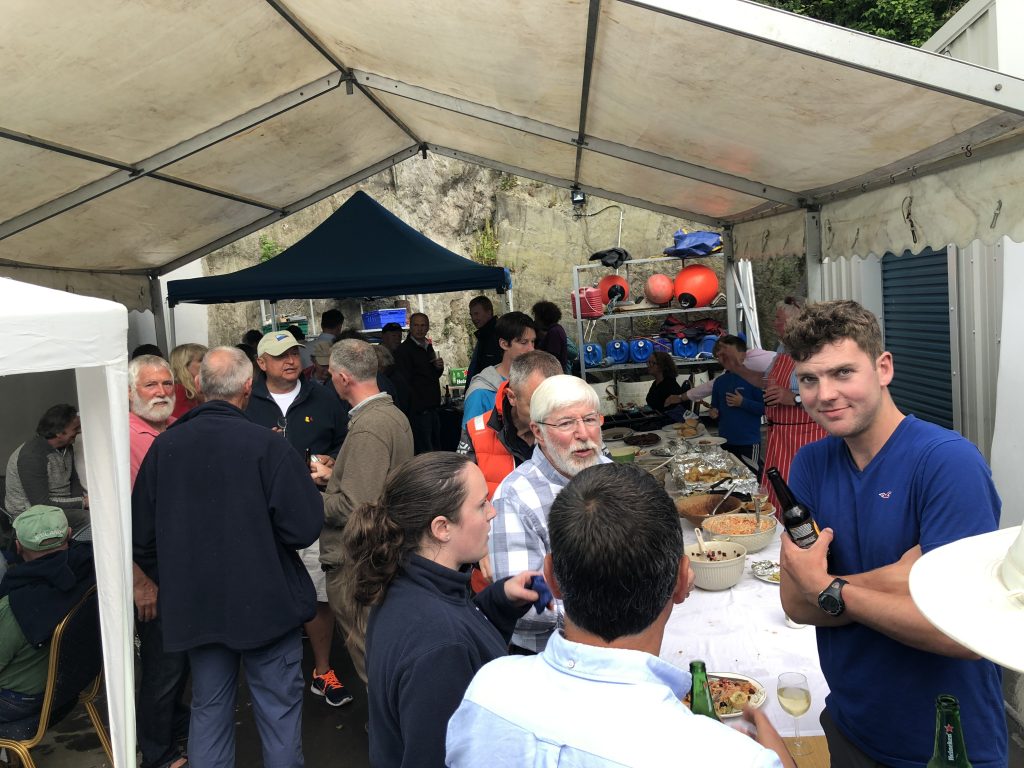 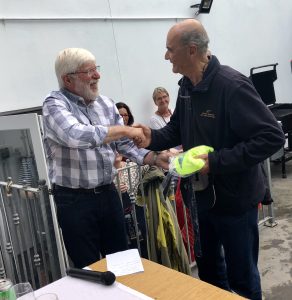 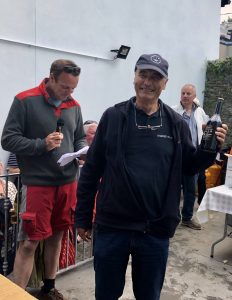 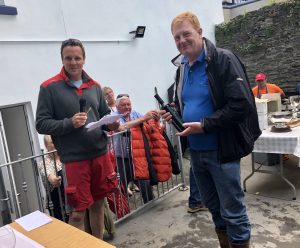 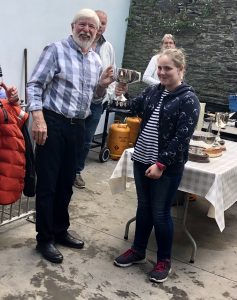 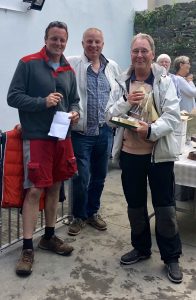 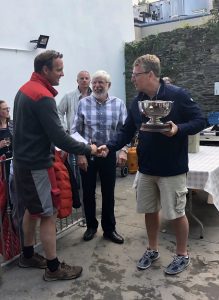 After a very jolly evening, none of the visiting boats had any interest in racing home on Sunday morning in the very light air. They slipped anchor one by one as they recovered and quietly sailed/motored out of the harbour. If they are true to their word, we can expect to see them all back next year.

The GHYC Squibs and Dragons completed another two races for the At Home RegattaTrophies.

There was a relaxed atmosphere in Kinsale Yacht Club at the start of the race to Glandore, which had to be postponed for an hour to allow the assembled crews time to  watch the Lions Tour rugby match! Fourteen boats set sail from Kinsale Harbour at 1100hrs for the beat into a +/- 20 knot southwesterly wind.

The line honours in Glandore went to Chancer, finishing in just under six hours. Twelve boats  finished within the eight hour time limit.At the BBQ held later that evening, the Kinsale fleet captain Dermot Lanigan, presented prizes to the KYC winners (see www.kyc.ie for full results). The first GHYC boat to finish was Kyachtic, sailed by Vince Tubb and friends who were presented with the Glandore Harbour Cup.

Meanwhile in Glandore Harbour, the Dragon and Squib fleets were racing in a strong breeze which led to a few retirements. Two races were held on Saturday afternoon with Squib Bluebottleand Dragon Miss Fire the overnight leaders.

We were delighted this year to also welcome cruising visitors from Schull Habour Sailing club and commend the d
edication and bravery of Frank O’Hara and crew, who ended up being the solo SHSC boat to make the voyage east to Glandore for the weekend. Let’s hope we see lots more boats and sailors from the West next year.
The BBQ held in the GHYC marquee was a magnificent effort, greatly enjoyed by over 130 happy eaters – the biggest number we have fed to date! Dee Sheehan,  supported by Elmarie, Jean, Kathleen, Caroline, Cynthia, Siobhan and young Jess, ensured that everyone had enough to eat. Kieran O’Donoghue ran the BBQ, ably assisted by Diarmuid O’S and Diarmuid O’D, Eamon Timoney and Ben. Diarmuid O’D also kindly donated the beautiful fish, and a mountain of tasty salads was provided by many generous club members. Aoife and Claudia kept tight control of the cash and enrolled an army of helpful young men to help with  the washing up! And Fergal Goulding manned a pop-up bar with some special brews from Eight Degrees Brewing and some delicious organic wines. By the time the party moved on up the hill at 11.00pm, everyone was in excellent form!

Sunday dawned with glorious conditions for the sail back to Kinsale. The visiting fleet left on time at 1000hrs with   spinnakers up before they had even left the  harbour. Kyachtic, while not racing, made the trip back to Kinsale in four hours!  Meanwhile the Dragon and Squib fleets sailed two races each in the harbour. The overnight leaders held on to their advantage.

Big thanks to John and Ann Williams for running the  races so efficiently and staying on the wall for so long on Saturday as we searched for a missing Kinsale boat, the helm of which was eventually found at the BBQ! And finally, many thanks to Ann O’Mahony and the crew of young sailors who ran the ferry service late into the night on Saturday, and again early on Sunday morning. 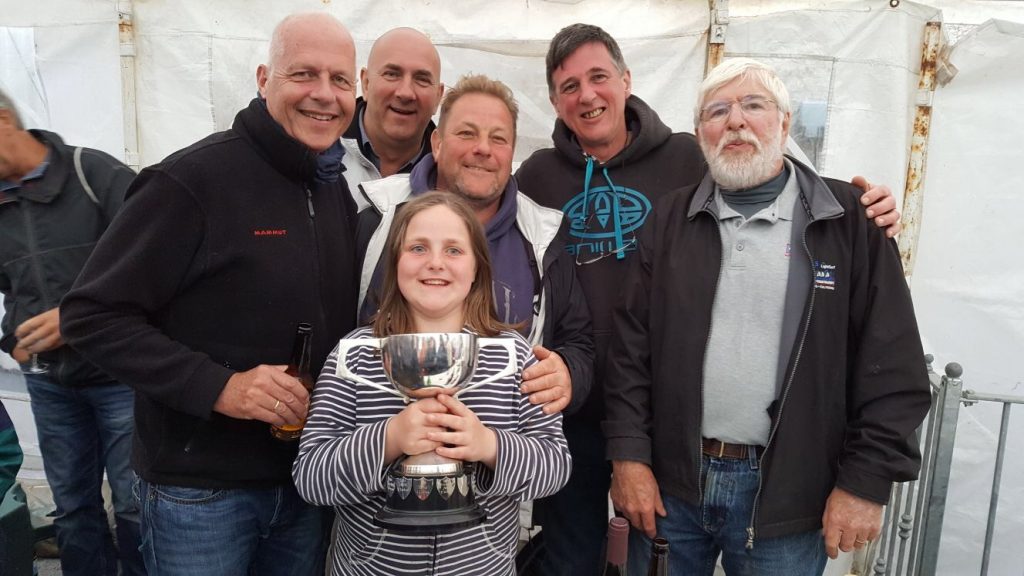 The June bank holiday weekend is the traditional start of the sailing season in Glandore and this year was no exception, especially with the glorious weather. GHYC was very much At Home and was delighted to welcome 13 cruisers from Kinsale Yacht Club into our lovely harbour on Saturday June 4th, after their super enjoyable race down from Kinsale.

Afterwards we hosted a fantastic BBQ and prizegiving in our brand spanking new yard/ dance floor beside the clubhouse. The BBQ was just first class and huge thanks have to the GHYC club members who made it all happen : the cooks (Diarmuid, Pat an Kevin), the amazing salad-makers (too many to mention), the Servers/ runners (Jean & Myriam), the Catering Director, Sally Wyles, who worked non-stop all day long and the best juniors in the world : Claudia – the plate seller and Fiachra the novice barman. Thank you all.

And thanks too to all the ferryboat drivers and Dan O’Sullivan in particular who made sure that all of our guests got back on board with a few on board!

And on Sunday morning at the very early time of 9:55 (for Glandore anyway) there was a fantastic race start comprising most of the Kinsale boats (minus the ones that slept in!!) and the local Dragon fleet and a lone Squib. All raced together to the mouth of the harbour where the KYC fleet peeled east and the GHYC fleet raced on around Adam and Sheila marks. All good fun and in keeping with the fun weekend, everyone got a prize for getting up so early !!!

All In Harbour Race