The Celtic Challenge is a fun team event between Glandore Harbour Yacht Club(GHYC) and the Royal Anglesey Yacht Club(RAYC). The format of racing is Admiral’s Cup style team racing under the regular Racing Rules of Sailing with the aim of keeping race management & racing safe and simple.  The event is held annually, in GHYC one year and RAYC the next.  The racing is in International Dragons provided by GHYC members when in Glandore, or in Fife Menai Straits OD’s when in Anglesey provided by RAYC members. The two teams sailed 4 boats each, drawn by lot, and exchanged the second day. Each boat is sailed by a minimum of three people, one of which is an owner’s caretaker.

This regatta has its roots back in 2005 when some of the members of RAYC trailed their Menai Straits One Designs (designed by Fife and, built by Dickie in 1931) over to Glandore for the GHYC Classic Regatta. The first boat into Glandore ran out of cash while waiting for the others and being short of money they asked Keiran O’Donohue, then the owner and operator of the Glandore Inn, for an advance. He not only advanced them once but twice, they were very thirsty! The following morning he collected the ingredients for their breakfast from Skibbereen and delivered them to the RAYC sailors in Glandore. As a result of this warm and friendly welcome RAYC has always brought boats to the bi-annual GHYC Classic Regatta. Early in 2016, Tak Kershaw and Hugo Brean-Turner of RAYC were chatting about an away trip for the Fife fleet. No doubt they were in the RAYC bar, sheltering from the February storms, as they came up with the brilliant idea of inviting themselves back to Glandore!  Initially Tak approached Diarmuid O’Donavan, a GHYC Dragon sailor, asking if GHYC would be interested in “some sort of team race” on an annual basis. A flurry of emails around the Dragon fleet confirmed interest and the dates and format for the first event to be held at GHYC  were agreed. A GHYC team would go to Anglesey the following year.  A beautiful perpetual trophy was kindly presented by Eamon Timoney of Fehily Timoney and Company. Eamon is a long standing member of GHYC and regularly sails with the Dragon fleet.

The racing in 2022 will take place at Anglesey over the weekend of the 18th and 19th June. 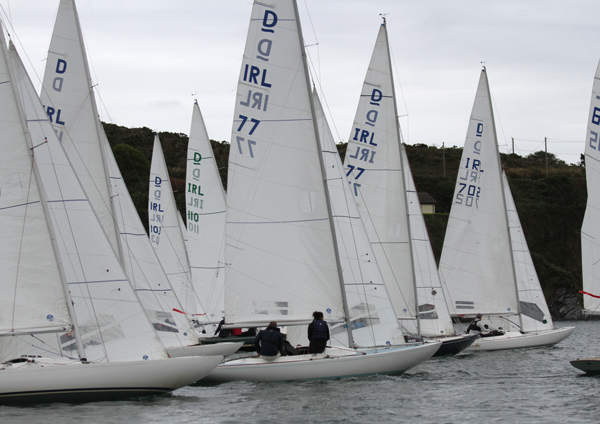 The 5th Celtic Challenge which was to have been held in Glandore in 2020 had to be postponed for Covid reasons and was raced in September 2021.  The trophy was brought over from RAYC who won it convincingly at the 2019 Challenge held in Anglesey.  The format for 2021 was to be racing from Glandore to Castletownshend and back (after lunch at Mary Anns) on the Saturday , and harbour races on the Sunday.  Dragons were chosen by lot on Friday evening from two groups of four boats, and the boats would be swapped between the clubs after each race

The weather on Saturday was perfect for racing, after a dubious forecast showing very light winds which happily filled in just in timefor the start.  After some close racing in the outer harbour the fleet spread out a little after rounding Rabbit Island, and at the finish in Castletownshend harbour GHYC finished with 1st, 2nd, 4th and 8th place to win the first race.  There was an extended lunch at Mary Anns, with no evidence of competitive temperance by any of the crews.

The wind held for the return, a fast spinnaker race back to Glandore, which settled into a series of mini battles between individual boats.  At the finish GHYC got a 1st, 2nd, 4th tie and 6th to win this race.  The 4th tie was a terrific nail biting attempt by the trailing RAYC to weather boat to roll the GHYC boat just at the finish.

Race 6 was closely fought, RAYC got 2nd, 3rd, 6th and 7th  to draw the race, avoiding the whitewash that they delivered to GHYC in 2019!  It was a pity that the event was haunted by Covid, preventing the usual amount of jollity we have come to expect, or suffer as some would say.  We very much look forward to the 2022 event in Anglesey. 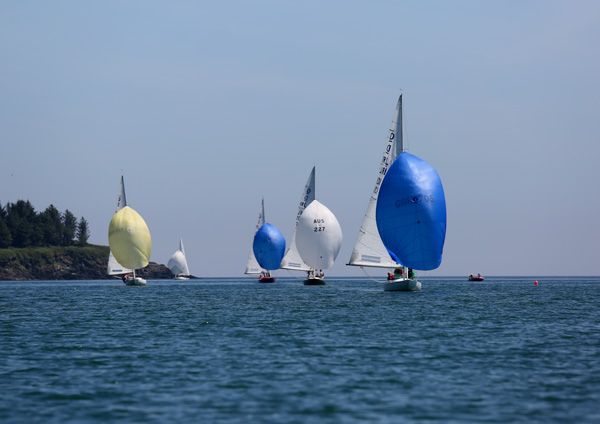 The RAYC sailors accompanied by some supporters arrived in sunny Glandore on Friday 22 June for the  third Celtic Challenge and were welcomed at the first reception to be held under the new yard roof  that evening. Eight Dragons took part in the competition, four flying green flags (GHYC) and four flying blue flags (RAYC), with six races scheduled over two days. In spite of an appearance of lethargy among sailors before taking to the water, which may have been due to the strong sun or possibly due to the nocturnal entertainment the night before, racing almost got off to perfect timely start had it not been noticed that the RO hadn’t actually given them course details!! This was swiftly put right and there were some exciting starts on the fist day with RAYC winning the first of three races. GHYC won the second and the final race of the day was a draw so all to sail for on the second day. 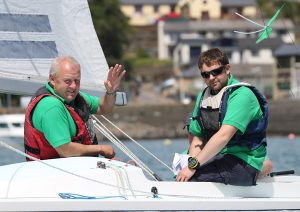 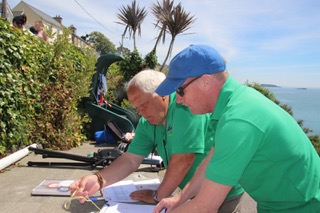 On Sunday (Day 2), another brilliant sunny day in Glandore the sailors were very keen to get going. Some challenging courses were set by the race management team aided their Consultant Glandore Sailing Guru Don Street.

A couple of boats were OCS on the first race with GHYC off to a good start, which they held onto to win that race. GHYC went on to win the second race with RAYC winning the final race of the completion.

The final result saw GHYC won three races and RAYC won two races. One race was a draw. Finally, GHYC managed to win the Celtic Challenge trophy for the first time and are looking forward to a return visit to Beaumaris (Anglesey) for next years  competition.

The trophy was presented by the sponsor, Eamon Timoney at a BBQ at Casey’s Pub in Glandore. So many people worked hard to make this a great event, big thanks to our race committee, support boats, and social team.

The GHYC Dragon fleet provided the eight boats in the water. Friday night there was an excellent reception party at GHYC clubhouse with plenty of liquid refreshments and great finger food. A draw was held for the boats to be sailed by each team on Saturday, with boats being reversed on Sunday to level the playing field. The racing on Saturday, in perfect conditions, was excellent, close, tough, but no protests or collisions. With RAYC sailing Aphrodite, Sonata, War Baby & Gypsy they were a very competitive team against GHYC sailing Miss Fire, Panache, Taranaki & Phoenix. Don Street was very pleased to see Gypsy score 4, 5, 5 in the hands of RAYC skipper Hugo Brean-Turner. Gypsy is an 83 year old Anker and Jensen Wooden Dragon slightly younger than Don, who felt that at 85, while happy skippering, he is too old to crew. He watched from the Square, with a Heineken in hand, while Kevin Piercy, Gypsy’s regular crew, sailed on Gypsy as owners rep. Don felt that Gypsy would have done even better if Hugo had not insisted in trying port tack starts!!!! 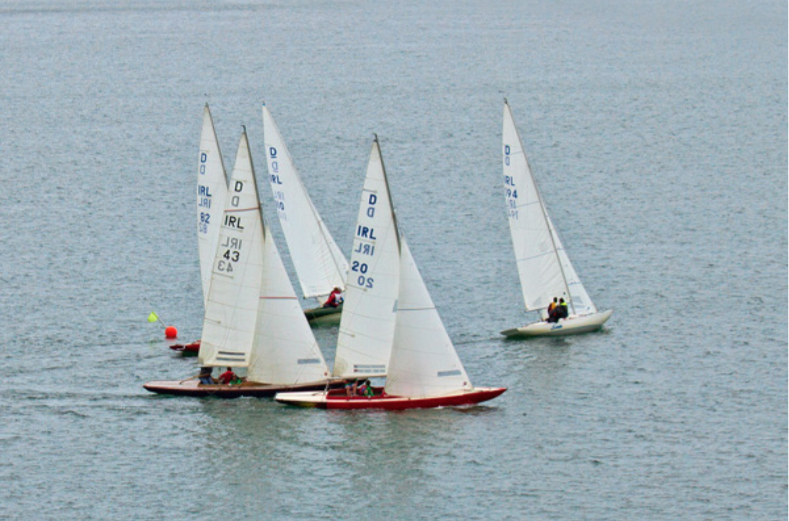 After the racing all sailors and supporters gathered at the Glandore Inn for a most enjoyable hoisting of pints and re hashing of races. Later there was an excellent dinner at the Glandore Bistro followed by further visits to the Glandore pubs with both teams competing for bragging rights in to the early hours. Daily race winner prizes were awarded to Aphrodite(RAYC), Sonata(RAYC) and Miss Fire(GHYC). 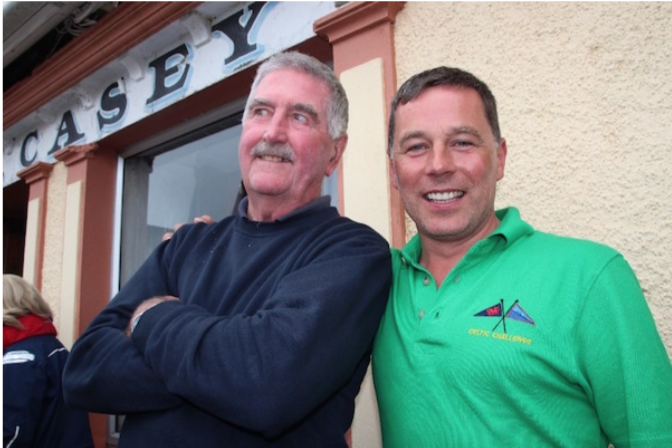 Sunday dawned wet and wild with forecasts of 25+ knots of wind, gusts in the mid 30s, so everyone assembled in the GHYC club house for
tea and coffee while Sally & Julia prepared sandwiches. The wind was close to the limit at which Dragons, particularly old Dragons, can be raced.

After a one hour postponement a decision was made to race. The PRO John Williams aided by his wife Ann, despite being saturated, did an excellent job setting a triangular white sail course inside the harbour twice around.

Three exciting races were sailed in +/-20 knots with some wicked gusts. With GHYC now sailing Aphrodite, Sonata, War Baby & Gypsy they became the dominant team against RAYC now sailing Miss Fire, Panache, Teranaki & Phoenix. The starts became a little aggressive but the low scores in the 3 races for GHYC, almost all 1, 2 & 3, were to no avail due to boat breakdowns suffered by the RAYC boats which worked to their benefit in the end.

In the first race Gypsy(GHYC) achieved a good start, as did the other GHYC boats, after Sonata forced RAYC boats off the line. It was a screaming reach to the first mark, Gypsy rounded third, came hard on the wind and crew looked hard at the situation. Skipper and crew decided it was too much for the old girl and retired with resulting high scores for GHYC. Phoenix (RAYC) had runner issues and did not sail any race and Panache(RAYC) suffered the same in the second race of the day. Despite the GHYC performance ,RAYC earned average points for the 4 races missed due to breakdowns, which were based on their skipper’s low Saturday scores.

After racing the cold and wet crews repaired straight to the Glandore Inn for beers, snacks and the usual post-mortems. At 1900ish everyone reconvened, showered & dry, up the hill in Casey’s Bar for more refreshments and the prize giving run by the GHYC Vice Commodore/Sailing Secretary, John Wyles.

With a good crowd of GHYC members plus the Anglesey team the little bar was packed for the presentations. Daily race winner prizes were awarded to Sonata(GHYC), Aphrodite(GHYC) and War Baby(GHYC). There was a special presentation to RAYC’s Anna who went for a swim from Taranaki.

The final result based on the grand total of each teams points (using the Low Point scoring system after applying SI Clause 17.5) for each team after 6 races was

Kathleen Timoney presented the Celtic Challenge Trophy to RAYC’s Ewan McEwan and then made a very nice speech on behalf of Eamon, who was unfortunately away on business. In response Ewan expressed the hope that RAYC would be able to run as good a regatta next year. 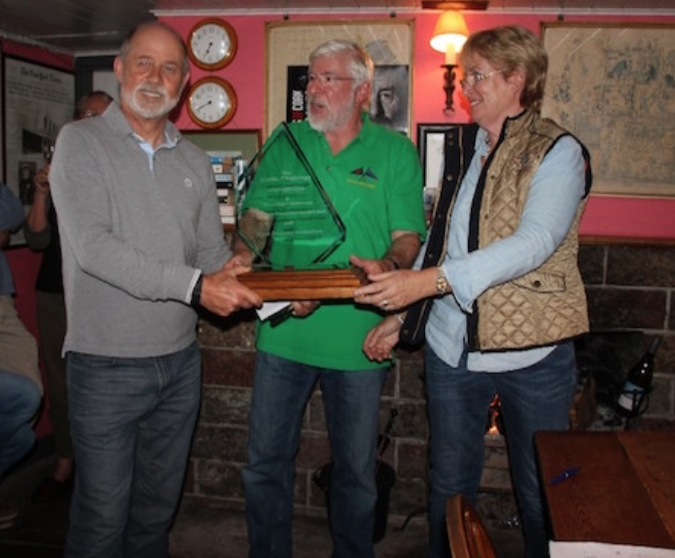 Discussions on the date and format for return match next year at RAYC were well underway as everyone continued to enjoy themselves. During the evening GHYC also celebrated the 30th Anniversary of the signing of the club’s Articles of Association and the many founding members present were recognised.

Feedback from the RAYC team who all got back in one piece despite being “completely ruined after three nights of drinking and merriment!” They love coming to Glandore because, in their words;

“You all made such an effort to welcome us all and we had the best weekend ever, full of laughter and fun, it was great to re-connect with people that I hadn’t seen for a long time and to meet new  friends; we all agreed that your youngsters were all very impressive, they welcomed us and chatted away with a wonderful air of maturity so please pass on our sincere thanks for all that they did to look after us and welcome us onto the boats, Wow that Dragon sailing is fun! “

Congratulations to RAYC for their win! 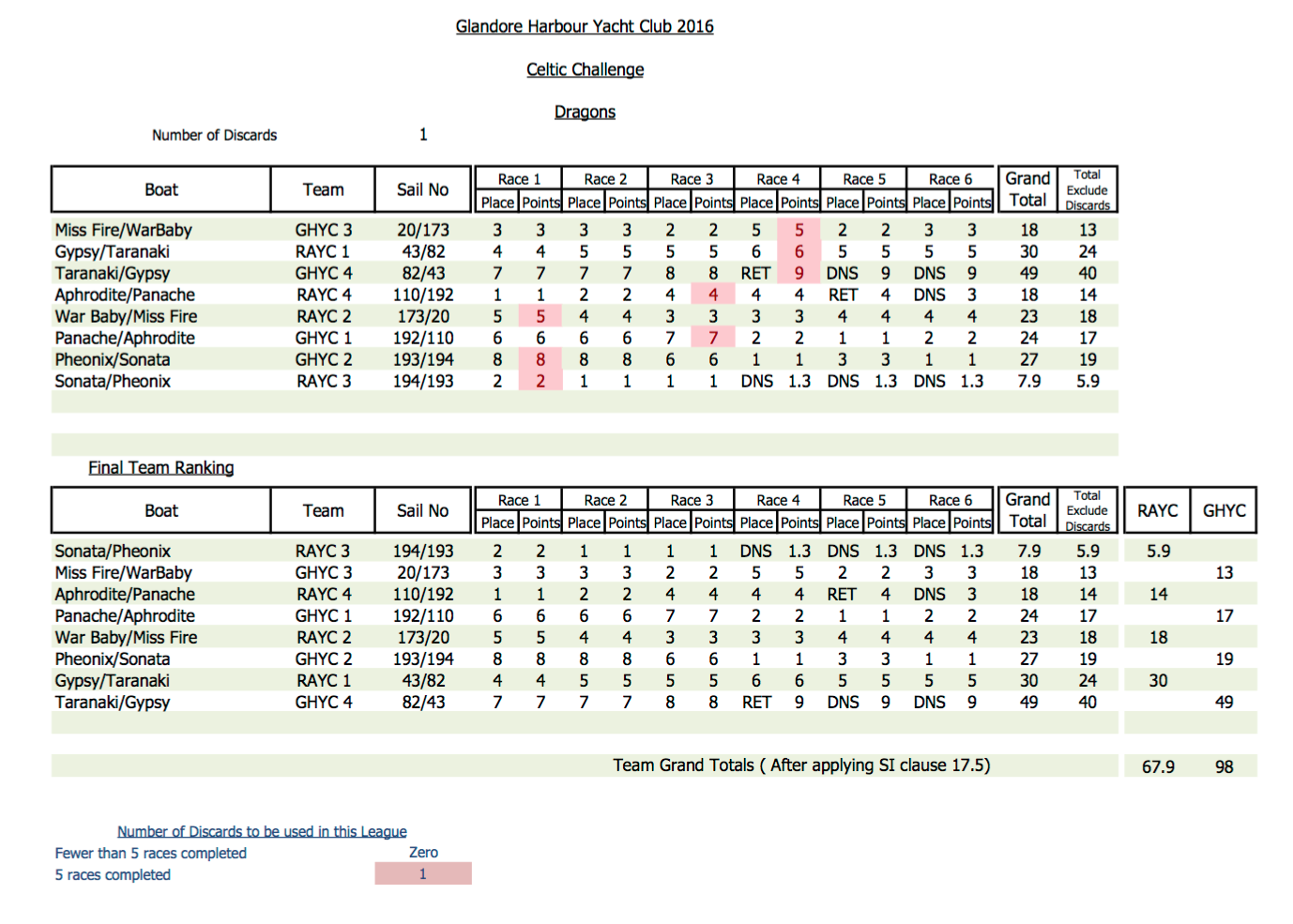