On the weekend of July 21st/22nd last, the 2018 Glandore Classic Boat Summer School took place in the new Club Pavilion. There was a very full programme of presentations for the two days and a new addition at this year’s Summer School was the inclusion of a film presentation on the Saturday evening. 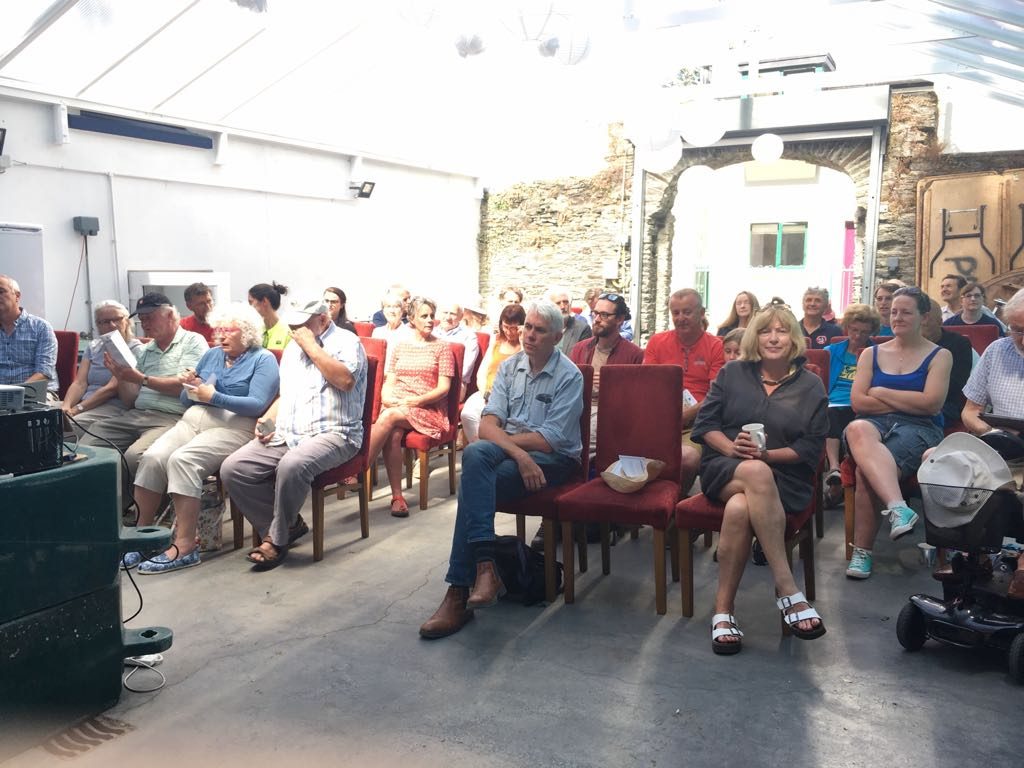 The opening address was made by  Tim Severin to a gathering of more the 60 people.  This was a great turnout and in general attendances were up on the 2016 event. Tim spoke of his own experiences with traditional boats and he mentioned the St Brendan and the Arab Dhow that he built for his spice Island voyage. He emphasised the importance of speaking with acknowledged experts on the ground, particularly when it comes to recreating historic vessels, the craftsmanship still exists but you need to look hard to find it.

Pat Ruane spoke of the currach its place in our maritime culture, the diversity of its form and community and considered options for the further development and growth of the currach for the future, the Currach Association of Ireland for example.

On Saturday afternoon Simon O’Keeffe & Tiernan Roe gave a lovely update on“Lady Min”, which was followed by a fascinating piece on the The National Monuments Service Wreck Viewer  by Karl Brady. 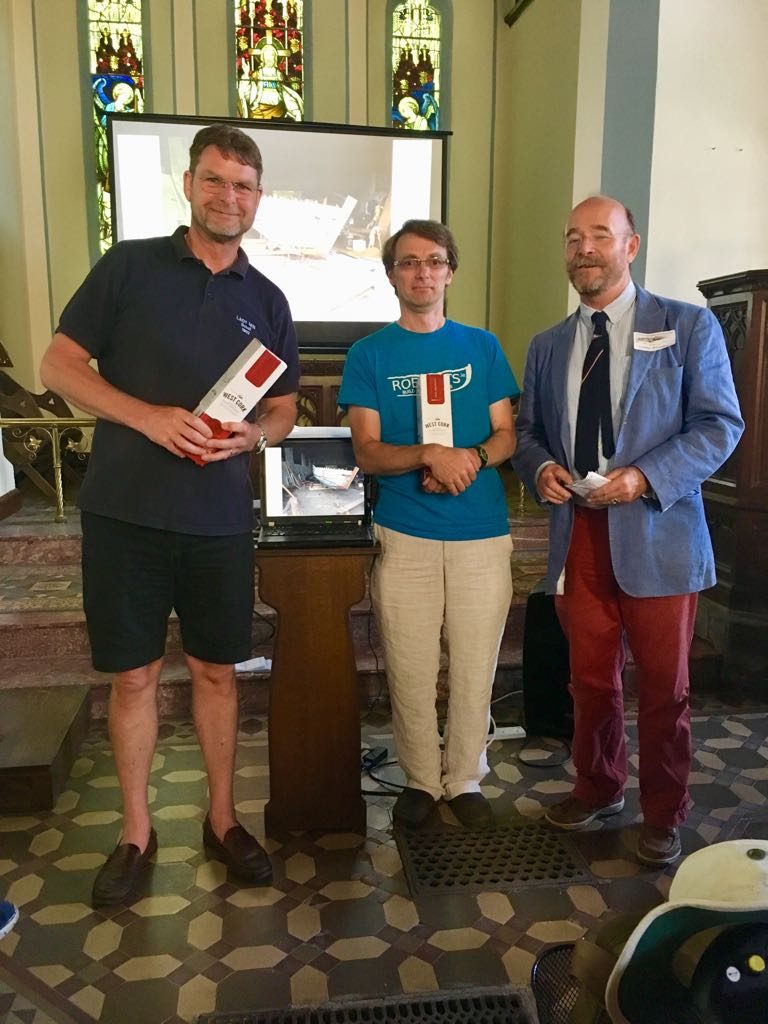 John Hegartyshared the views of  Save Cork City group who are currently promoting a Tidal Barrier as the best flood protection for Cork while raising awareness of the importance of the authentic historic city centre with our Love the Lee campaign  The film on Saturday evening was “The Camino Voyage” documentary movie of a 2,500km modern day celtic currach odyssey this was attended by three of the crew for various parts of its journey, Padraig O’Dunnin, Liam Holden and Brendan Begley.

On Sunday Morning, there were two excellent presentations. First, “West Cork Coast from the Air” by Dennis Horgan, who gave us a wonderful insight into Cork, its natural and built diversity and the interaction of its inhabitants with the areas they live in. 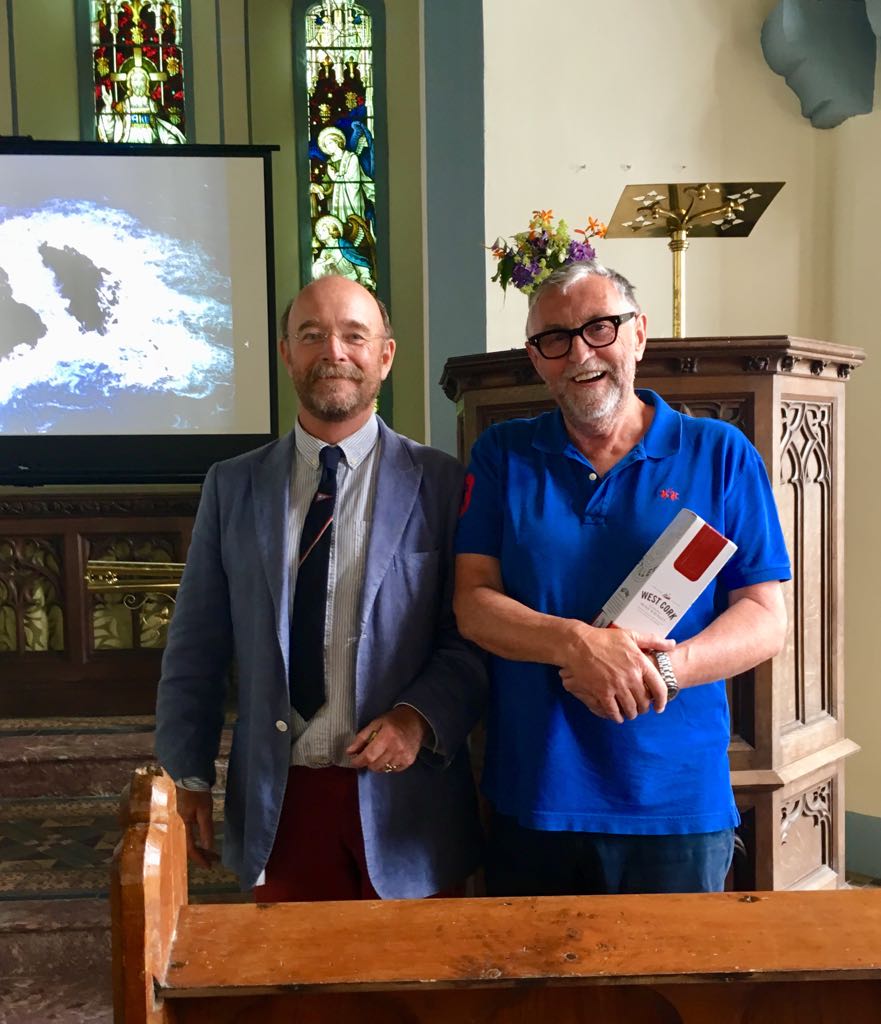 This was followed by Graham Bailey speaking about the Peel Castle. Graham has owned, rebuilt and re-rigged the boat as a three master lugger over the past 20 years and has sailed her extensively as far as the Mediterranean, Madeira and the Azores and later to Galicia, Spain, Brittany and Hebrides.

On Sunday afternoon Hal Sisk spoke on work underway at the moment to rebuild The Dublin Bay 21’s, as an accessible and inexpensive one-design racing option that better suits modern living and boat usage and the plans to get all of these boats back on the water and re-launched again as a racing class, and not just for Dublin Bay! 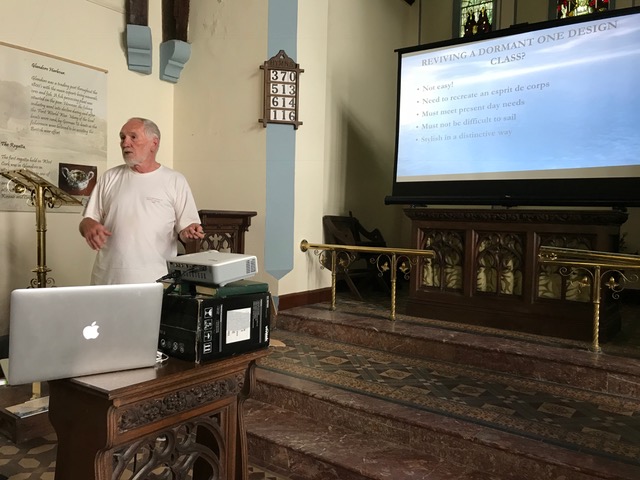 The final presentation on Sunday evening was from Pat Tanner who gave a fantastic account of his adventures in the measuring and preservation of ancient vessels in home waters and abroad, he concluded with a fascinating project to record some of the traditional fishing boats of the Sultanate of Oman on the south-eastern coast of the Arabian Peninsula. Then there was playtime where Pat let us try the virtual and augmented reality equipment that is part and parcel of his work at the moment, really interesting equipment with immense potential for the future.

The Summer school closed with a  sincere thank you to all the speakers and to all who attended during the two days by Cormac O’Carroll, plans are already in place for the next Summer School. 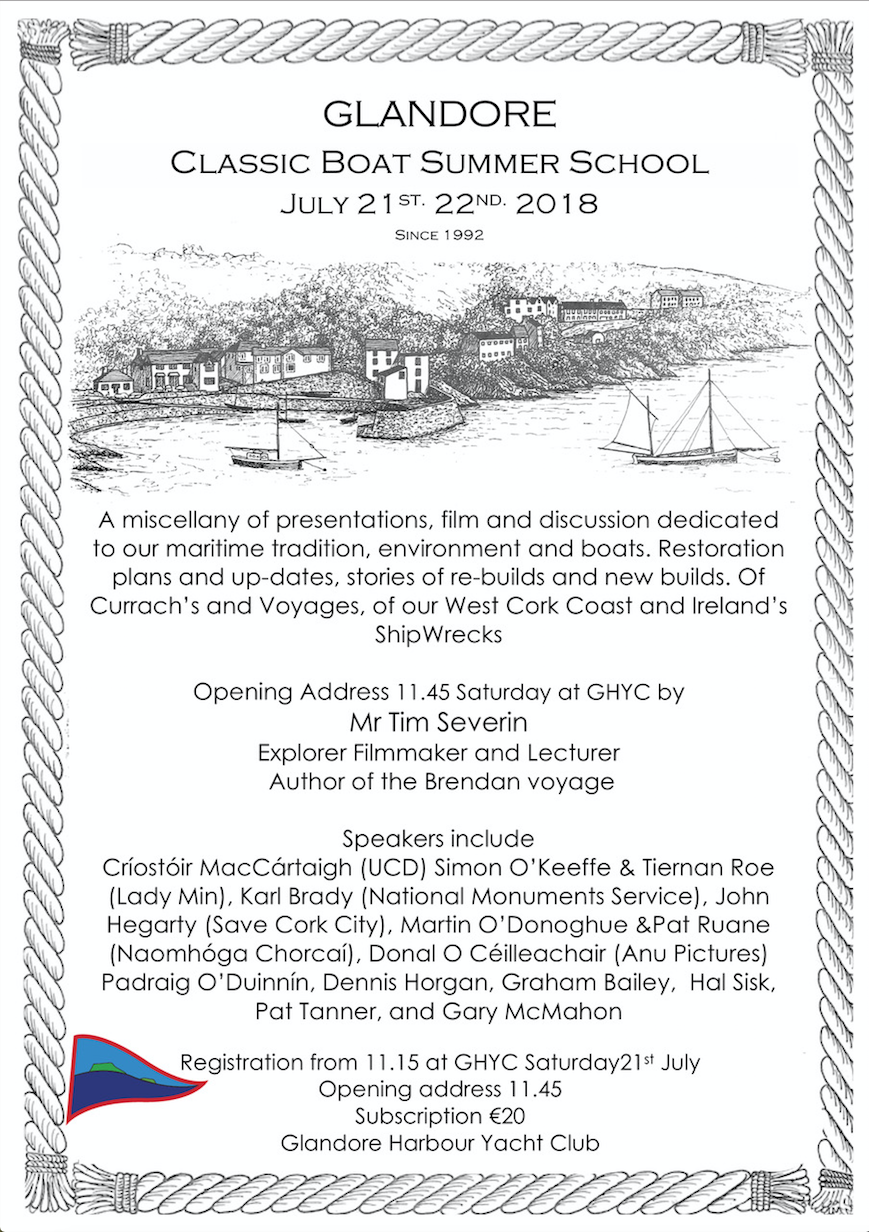 Tim Severin has sailed a leather boat across the Atlantic in the wake of St. Brendan the Navigator, captained an Arab sailing ship from Muscat to China to investigate the legends of Sindbad the Sailor, steered a replica of a Bronze Age galley to seek the landfalls of Jason and the Argonauts and of Ulysses, ridden the route of the first Crusader knights across Europe to Jerusalem, travelled on horse back with nomads of Mongolia in search of the heritage of Genghis Khan, sailed the Pacific on a bamboo raft to test the theory that ancient Chinese mariners could have reached to the Americas, retraced the journeys of Alfred Russell Wallace, Victorian pioneer naturalist, through the Spice Islands of Indonesia using a nineteenth century prahu, and traced the origins of Moby Dick, the great white whale among the aboriginal sea hunters of the Pacific. His Historical novels especially the tales of Hector Lynch have been translated to many languages from Portuguese to Korean.

Críostóir is the Director of the National Folklore Collection UCD and he is the editor of the 2008 book The Traditional Boats of Ireland.  This project arose from a lecture at the 1994 Glandore Classic Boat Summer school and is the result of a combined effort by Irish people who are passionate about the rich diversity of boat types and maritime heritage throughout the country. This project is a by-product of a loosely affiliated group of individuals with a shared realisation that Ireland’s traditional boat types are rapidly disappearing and the purpose is to raise awareness of the rich diversity of our maritime traditions.

At the 2016 Glandore Classic Boat Summer School Simon spoke of his family links to the Lady Min a 30ft gaff–cutter Lady Min first launched in Schull in 1902 and the urgent need to save and restore this important sailing boat. This year Simon and Tiernan will take us through the progress so far and challenges ahead to complete the re-launch so that the Lady Min will survive another 116 years.

Karl Brady works with the Underwater Archaeology unit of the National Monuments service. It is no surprise that significant numbers of shipwrecks have been recorded from around our coast, in April this year the Underwater Archaeology unit released their Irish wreck viewer, an interactive database of wreck Inventory of Ireland (WIID) which is an archive of over 18,000 wrecking events and it is estimated that the true figure could be as high as 30,000 wrecks. Karl will speak about the application its sources and development.

John is a Cork architect and a sailor who is a founder and deeply involved with the save Cork City movement.  Save Cork City wish to protect and repair historic Cork for the benefit of the local economy and the well-being of all. We wish to inform new ways of seeing the city and to present comparative solutions to problems that we face with reference to other similar places. We are currently promoting a Tidal Barrier as the best flood protection for Cork while raising awareness of the importance of the authentic historic city centre with our Love the Lee campaign

Following their very successful Currach seminar and showcase during the Cork Harbour festival in June this year, Pat and Martin will consider the growing interest in currachs, both at grassroots level in Ireland and further afield and will propose options to maintain and strengthen the current currach revival. Although many of these craft are no longer in everyday use in their native communities, there has been an extraordinary growth in interest in the boats from elsewhere in Ireland and from abroad where the seakeeping qualities and economy of means of the traditional currach are more than ever appreciated. How can we help to promote this wider appreciation while consolidating the use of the boats along the west coast?

Dónal  O  Ceilleachair (director)  and  Pádraig Ó  Duinnín,  founder of  Meitheal  Mara. Will attend and participate in a screening of this film that documents the origins and voyage.  In 2014, a Writer, two Musicians, an Artist and a Stonemason set their sights on an audacious voyage, a Camino by sea, in a Naomhóg (a traditional West Kerry rowing Curragh) they built themselves.  This immersive and evocative feature length documentary follows the crew on their inspiring and dangerous journey from Ireland to Northern Spain, on this 2,500km modern day Celtic  Odyssey

Dennis Horgan is an aerial photographer with a unique perspective on Cork and our west Cork Coast, taking us into the skies to give a bird’s-eye view of Ireland’s largest county and its vibrant coast line and topography. His recent publication Cork from the Airgives us a wonderful insight into Cork, its natural and built diversity and the interaction of its inhabitants with the areas they live in.  Dennis will share some particularly impressive coastal images and the background to their creation.

PEEL CASTLE was built in 1929 by Gilbert & Pascoe of Porthleven, Cornwall  as a fishing Luther working out of Newlyn from 1930 to 1939 as PZ17when she was requisitioned for war service. She ended her fishing days in the Isle of Man in 1979.  Graham has owned, rebuilt and re rigged this boat as a three master lugger over the past 20 years and has sailed her extensively as far as the Mediterranean, Madeira and the Azores and later to Galicia, Spain, Brittany and Hebrides. Graham will tell his story and that of the boat.

The Dublin Bay 21’s, these were seven yachts designed by Alfred Mylne and built between 1903 and 1906 under a commission from the old Dublin Bay Sailing Club to encourage inexpensive one-design racing!  Hal will speak of the new plans to get all of these boats back on the water and re-launched again as a racing class.

The traditional boats of Ireland pioneered the use of 3D laser scanning technology, 69 traditional vessels have now been recorded using this technique, and these are currently being published online in a virtual museum at www.tradboats.ie.

This presentation will showcase some of the technology and methods developed to record these traditional vessels. And will conclude with a fascinating project to record some of the traditional fishing boats of the Sultanate of Oman on the south-eastern coast of the Arabian Peninsula.

Pat Tanner has been building, repairing and sailing boats for over 20 years, he has worked on  projects including the digital reconstructions of the 16th C Drogheda Boat for the Underwater Archaeology Unit of Ireland, the Newport (Wales) Medieval Ship, the Grand Hotel Shipwrecks in Stockholm, the Poole Iron Age logboat and the Bremen Cog of 1325. Pat is currently undertaking a research PhD in Maritime Archaeology at the University of Southampton.

The last of Ireland’s traditional wooden sailing ships. Designed by Limerick man Conor O’Brien and built in Baltimore in 1926, she was delivered by Munster men to the Falkland Islands where she served valiantly for seventy years. Under the careful direction of Gary McMahon AK Ilen was returned to Ireland in 1996 and for the better part of the past twenty years AK Ilen has been through a soulful rebuild at Liam Hegarty’s boat yard in Baltimore. Re-launched earlier this summer the boat is currently undergoing sea trials in West Cork before her voyage to Limerick for fit out and completion. Gary will speak of the project and what it means for our maritime heritage.