The 2018 Gordon Cup will be held on Sunday, August 5th, from 1pm. The prizegiving will close the event from 4pm.

Glandore’s biggest mixed dinghy racing event returned on Sunday 31st of July. The event saw 32 boats and over 50 participants take to the water, some to compete, others just to have fun.

The forecast had predicted light winds and clear skies, but a sea breeze ensured ideal conditions for all competitors.

After a competitive start, Jay Slice and Cillian Sheehan took advantage heading towards the windward mark. Around the course Rob Hedderman, Fiachra Goulding, Caroline Nugent and Katie Sheehy were bunched towards the front while Peter Hayes, Tiernan Brown and David Forde all showed good technique to put pressure on the leading pack.

Some of the more experienced sailors began to peel away from the rest as the race went on but there were some outstanding nominations for “Capsize of the Day” and “Singers of the Day” with Phoebe Archer’s 7 man Vision and Julie Monahan’s Topaz to name a few.

Towards the front of the group Jay Slice and Cillian Sheehan were treating the spectators to match racing that Ben Ainslie would have been proud of.

As the race concluded, the sailors headed into their deserved hotdogs prepared by Cathy Kelleher and her band of helpers.

A big thank you to all of the instructors who helped out on the day, to Aisling and Alex who organized the event, to Cathy Kelleher for Catering for the event and to Elinor Gordon as always for donating both the prizes and the trophy. 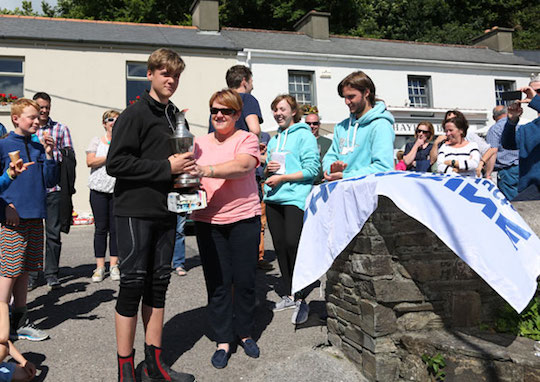