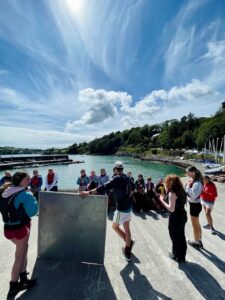 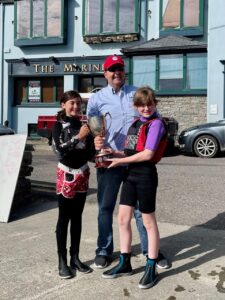 Tuesday June 14th saw the conclusion of the GHYC Primary Schools Sailing Programme with the School’s Regatta, an afternoon of racing where the school sailors get to race and, more importantly, have a lot of fun together!

Leap, Glandore & Union Hall NS’s were all vying for the title this year. Unfortunately due to bad weather the previous week Abbeystrewry only sailed one day and so decided not to field a team this season but will be back on the water next year.

Union Hall NS dominated the Regatta for the past six years and so Leap and Glandore were hoping to end this winning streak, even rumors of a gang up were rife on the pier but no official evidence was discovered!!

With perfect racing conditions, of light SE winds and blue skies forecast for the afternoon, under Race Officer Peter Hayes. The format of the Regatta would be the same as previous years, 3 races to be held with one “Fleet Race”, one Relay Race and finally the much anticipated “Bring the Parent Home” race. (No parents were harmed in the running of this race!). Each school team consisted of 4 sailors, split into 2 crews.

Crew 1’s were up to race first. A good start to the triangle course from the 3 crews saw the upwind leg being pivotal in deciding the winner. Glandore, with Zaiba Mahmood and Isabelle Murphy crew, sailed a near perfect beat and rounded the windward mark first, with UH second and Leap, with Bailey O’Donovan and Emer Jennings on board, hot on their heels. This order remained until the finish line with Glandore taking the gun, and thus the lead in the Regatta.

Race 2 was the Relay with Crew 1 teams staying onboard to do the first triangle. A fantastic start by helm Ciara Perez & crew Ali Moloney, for UH saw them lead the beat but Glandore picked up a good lift and managed to round the windward mark first. Perez didn’t make it easy for Glandore. A good rounding of the leeward mark saw UH nearly take Glandore but Mahmood was quick to pull in her sails and managed to reach the changeover boat for a crew swap over first. Glandore, with Paddy Paison & Milo Kinsella now on board, was off on leg 2. A slight shift in winds saw both UH and Leap take a little longer to swap crews but once all Crew 2’s were on board they were quick to race the second triangle. Glandore took first place, UH second and Sophie Scarlett and Zoe O’ Brien racing for Leap placed third.

Race 3 is the infamous, and dreaded, among some participants, “Bring the Parent Home” race. Crew 2 Helms remained on board with the jib crew being swapped out for a parent. The race entails the boats sailing a racing course into the pier, first parent to run up the pier and over the line in front of the briefing wall wins, simples!

The Leap NS helm for Race 3 was Sophie Scarlett with parent Jay Scarlett reluctantly on board, UH was helmed by Fintan Deasy with Nicola O’Donovan on board (while regretting not wearing a winter wetsuit) and Glandore was helmed by Milo Kinsella with Heather Mahmood raring to go!

First over the startline for Race 3 was Union Hall with Fintan Deasy having called a starboard tack over a Port Glandore. Leap were close behind with the experienced Sophie Scarlett guiding her crew to the windward mark.

There was an electric atmosphere ashore as spectators, helpers and the race committee cheered the sailors as they raced into the pier.  Commodore Tim Forde was poised on the finish line ready to call the results.

Glandore managed to overcome their troubled start and rounded the windward mark first, leading the fleet into the harbour and ultimately crossing the line first. Union Hall took second and Jay Scarlett for Leap, who was seen competitively, diving into the artic Glandore waters, crossed the line for third and closed off the Regatta in dramatic fashion!

After derigging Commodore Tim Forde presented the cups to an overjoyed Glandore team! In his speech he noted how good it was to have the programme back up and running as normal again and he especially praised all the competitors, some of whom were racing for the very first time. Tim also gave special thanks to all the instructors, helpers and parents who, not only got involved in running the Regatta, but also helped to make the courses for the four schools safe, fun and a really great introduction to the world of sailing to the children.

As the prize giving came to an end, and the pier emptied, Leap and Union Hall teams could be heard plotting their revenge for next year! Roll on the 2023 Schools Regatta!! 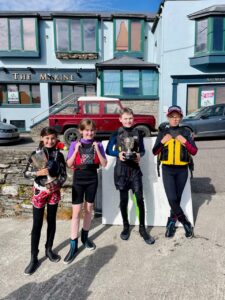 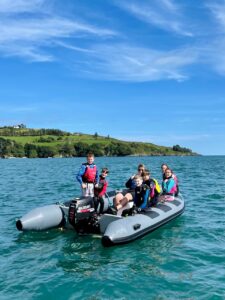 On Saturday, July 13th, we made our annual pilgrimage to Castletownshend in glorious sunshine. Check out the photos captured on the day by Andrew Harris, Elmarie O’Riordan and Gervin Kielt .

As Storm Ellen abates, we are monitoring the weekend forecast ahead of the Glandore Inn Rose Bowl Regatta. As the predicted conditions are changing continuously, the Sailing Committee will assess the suitability for racing as early as possible on each of the race days. In the meantime, please keep an[…]