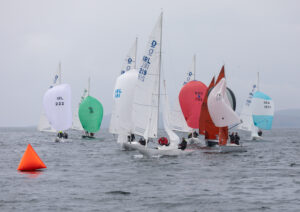 Six GHYC Dragons travelled up for the Kinsale Keelboat Regatta over the Bank Holiday weekend, generously sponsored by Robotic Mowers Cork. This was a great turnout to kick off the 2022 Season – very much appreciated by the local fleet. Sunday saw freshening, low-teen, winds with rain at times. Race officer John Stallard set the fleet off after only a short delay as it took so long to get out to the start line offshore. Top GHYC boat was Moonshine (J. Frame, T. Forde & A. Forde),  which claimed a 6th position in race one. Adrian Bendon in Mar J was first. Race two quickly followed and top GHYC boat was Aphrodite (J. Wyles, A. Kindle and, P. Hayes) finshed 5th, but after a penalty was awarded 8pts. Mar J, another 1st.The third race saw Moonshine in 7th and again Mar J was showing great pace with another win. A 4th race was run as a precaution in case the lack of wind forecast for Monday prevented racing. Aphrodite was top GHYC boat with an 8th. This time Cameron Good in Little Fella got line honours.

On Monday the decision was taken to race! The wind was light but sailable, it later got very cyclonic and died to a whisper before picking up for a lovely sail back into Kinsale Harbour! Race 5 saw a win for James Matthews in TBD. Top GHYC boat was Moonshine with 6th place. After the delayed start of the 6th and final race (due to the aforementioned light cyclonic wind) , Moonshine rounded the windward mark in first place and was followed most the way down to the leeward mark by a huge basking shark (they might have got a wee push as the wind died and the rest of the fleet dropped back!). They went on to claim line honours for the delighted crew! But overall the event was soundly won by a delighted Glandore native Adrian Bendon and crew in Mar J (KYC) with three bullets in the first three races.

A big thank you to Robotic Mowers Cork and all the Race Management Team for their excellent event management and to local dragon class captain Daniel Murphy and KYC for organising a couple of great days of racing. Now that the cobwebs have been blown off, we can look forward to a great season in our little corner of West Cork.   By Dragon Fan                    Photos Kathleen Hayes

Dragon Derby – How it all started The Dragon Derby, 14 short races in two days, is the oldest series of GHYC. I came up with the idea in 1987. All races were in the inner Harbor started from the flagpole, so that it was also fun to watch. Everyone[…]

Another classic Glandore event, supported by the Glandore Inn since 1986, was held last weekend. Unfortunately the tail end of Storm Ellen forced cancellation of racing on Saturday but visiting Dragons from Dublin & Kinsale still craned in. An early briefing was held Sunday morning. With the forecast of steady[…]