The Bishop of Cork, Cloyne and Ross, the Right Reverend Dr Paul Colton, has announced that,  he has appointed the Reverend Cliff Jeffers, currently Incumbent of Fanlobbus Union of Parishes in the Diocese, as Incumbent of Ross Union of Parishes. Ross Union of parishes encompasses the ancient parishes of Ross (Rosscarbery), Kilmacabea (Leap), Myross (Union Hall), Kilfaughnabeg (Glandore) and Castleventry in West Cork. Cliff has been Membership Secretary and an active member at GHYC since 2021. Surely God is on our side now ! Cliff has recently become the proud owner of a fine cruising yacht, first to appear on a mooring this season, putting others to shame for their tardiness. 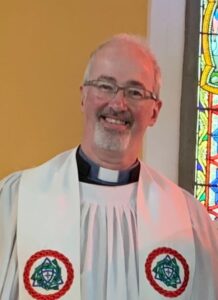 In addition, the Reverend Cliff Jeffers has been appointed by the Bishop (with whom rests, independently, the right of appointment to the dignity) to the Deanery of Ross. The Dean of Ross is one of the senior clergy of the United Dioceses of Cork, Cloyne and Ross. In accordance with the Statutes of the Cathedrals of the Diocese, the Dean of Ross is also Chancellor of the Cathedral Church of Saint Fin Barre, Cork. The latter is an honorary position. The Cathedral Church of Saint Fachtna stands on a site where Christian worship has been offered for over 1400 years. Here St. Fachtna developed a monastic settlement in AD 590. Pilgrims and scholars came from near and far and gained for Ross the title ‘‘Ross Ailithir’’- the wooded headland of the pilgrims.The earliest mention of a church building on the site is in the 10th century and reference is made to a Cathedral at the end of the 12th. century. Content courtesy of the Church of Ireland, Cork. See the full story here :

Appointment of Dean of Ross and Incumbent of Ross Union of Parishes | Latest News from the Church of Ireland Diocese of Cork, Cloyne and Ross (churchofirelandcork.com)

This past weekend, August 28th/29th, was Rose Bowl weekend for Dragons and Squibs generously sponsored by the Glandore Inn as always. Race officers David Forde and Siobhan Keane Hopcroft and a team of top notch volunteers provided five great races in Glandore Bay for each fleet. The weather Gods[…]

END OF SEASON CLEAN UP

Thanks to all the Club Members who volunteered all morning for an end of season clean up and cleaning and storing of gear. The Club Squibs are now also housed under cover along with a lot of other equipment. Great work was done by Club Members old and young with[…]